Ms. Rebecca Chang of Plano, Texas entered our 2015 Ronald Weiss Scholarship competition, and was chosen by Mr. Weiss as having submitted the winning essay.  Ms. Chang did a wonderful job!  Congratulations to Rebecca!  We would also like to thank all of you who entered the competition.  Don’t give up as we are holding the scholarship competition again in 2016.  Click here for more information.

If the decision were up to you, would you repeal the 2005 bankruptcy reforms as related to private student loans? Why or why not? 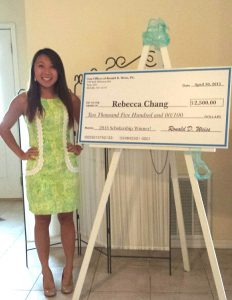 The Bankruptcy Abuse Prevention and Consumer Protection Act of 2005 has tightened bankruptcy code so that no student loan may be discharged in bankruptcy, federal or private, unless it can be proven that repayment would cause “undue hardship”. Federal loans are not included in the scope of the question for this paper, for good reason. These loans are easily obtained and far less borrower screening is conducted than with private loans; thus, if bankruptcy was an option, the same moral hazard problem that undermined the mortgage market would likely also occur in the student loan market. There are also innumerable loan repayment and forgiveness options for federal loans, which has shielded discharge limitations on this type of student loan from heavy criticism.

On the other hand, lawmakers have brought attention to restoring bankruptcy protections for private student loans, pointing to the legislative protections retained in comparable areas such as credit card debt and medical bills. There is, however, procedure for filing for discharge of private student loans, under the “undue hardship” wording of section 528(a)(8) of the bankruptcy code. One could file under chapter 7 for discharge, or chapter 13 for debt restructuring. An adversary proceeding must be filed in addition to the bankruptcy filing, and one would typically undergo an undue hardship test such as the Brunner test. Any such hardship test evaluates whether debt repayments prevent a minimum standard of living from being reached, as well as if good faith efforts have been made in repayment.
The abovementioned procedure for filing private student loan bankruptcy elucidates how arduous and involved this process is, as well as why it is infrequently pursued. The courts have also in the past taken a hardline approach, and only recently have they eased up slightly. The Eighth Circuit Court of Appeals in 2013 upheld a decision in Conway v. National Collegiate Trust to use a “totality of circumstances” test, reviewing the past and expected future financial resources of the debtor to determine undue hardship. This established the precedence that a college degree does not necessarily mean a debtor will have the necessary financial resources in the future to avoid undue hardship, which has typically been the argument used in the past when applying the Brunner test and rejecting discharge requests for student loans.
Given the direction the courts have been moving in, I would recommend the repeal of the 2005 bankruptcy reforms with respect to private student loans. Not only would it decrease the financial and time burden associated with filing for bankruptcy under section 528(a)(8), it would also return the financial incentive for screening borrowers to banks and reduce moral hazard. If bankruptcy is reinstated as an option, banks will have a greater incentive to monitor and review borrowers, as if the debtors  go bankrupt, the bank will be forced to absorb the ensuing losses. The high level of student debt in the United States has been compared to the housing bubble. I would posit that without bankruptcy protection legislation for student debtors, this asset bubble will only be given more