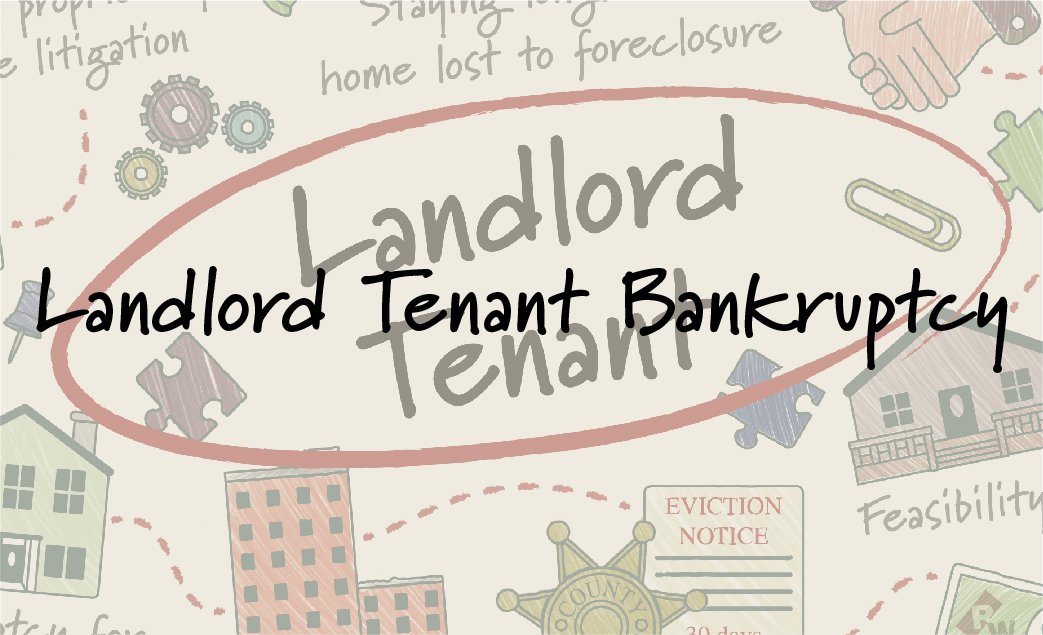 You are the landlord of a commercial building. You have a tenant in the building occupying the premises under a five-year lease.

You arrive at your office for what you believe will be a non-eventful day when you receive in the mail an official notice from the United States Bankruptcy Court evidencing the fact that your tenant is now a Debtor that has filed a voluntary petition for relief under Chapter 11 of the United States Bankruptcy Code. Your mind starts to scramble as you ponder how the impact of the tenant’s Bankruptcy filing will affect your lease with the tenant. You review the lease quicky and notice that there is a clause that states that if the tenant files for Bankruptcy, it is deemed to be a default under the lease and that you are entitled to the premises back. You then review the account history for the lease and determine that the Debtor missed lease payments for the two months prior to the Debtor’s Bankruptcy filing, totaling $10,000.00.

As a landlord of this commercial lease for a tenant that has filed for Bankruptcy, you need to ascertain what your rights and remedies are under the Bankruptcy Code.

First and foremost, you as Landlord may be initially inclined to believe that the clause in the lease entitling you to terminate the lease upon a Bankruptcy filing by the Tenant provides for a quick and simple remedy to the situation. Unfortunately, that is not the case. Those clauses (referred to as “ipso facto clauses”) are unenforceable under the Bankruptcy Code.

Having this quick route to possession of the premises eliminated, you the Landlord now have to navigate your way through the obstacles and time frames imposed by the Bankruptcy Code and the “moat” of Bankruptcy protection afforded to the Tenant, who is now a Bankruptcy Debtor.

Under the automatic stay provision under 11 U.S.C. Section 362 of the Bankruptcy Code, once a Bankruptcy petition is filed, any and all collection activity against the Debtor Tenant must stop immediately. This means that the Landlord cannot send demand letters of commence (or continue) an action to evict the Debtor from the premises in landlord tenant court. Since all collection activity must cease, you as Landlord say to yourself-“Does that mean that the Debtor can simply occupy the premises without paying me anything while the Bankruptcy is pending? What am I going to do ?” Your mind goes into a tail spin at the thought of not only being out $10,000.00 in rent for the two months prior to the Debtor’s Bankruptcy filing but being stiffed for the remainder of the debt due to you under the term of the lease, since the automatic stay prevents you from doing anything to collect.

At first glance, all seems hopeless because, in your mind as landlord, you are: (1) out two months rent; (2) due $240,00.00 under the balance of the term of the lease and (3) you can’t get the Debtor of the premises. But don’t despair just yet. The Bankruptcy Code has provisions which are designed to protect you as the landlord as well.

Depending on the amount of pre-petition (and post-bankruptcy arrears owed on the lease),the Landlord can always file a Motion under Section 362 of the Bankruptcy Code to get relief from the automatic stay. If the Landlord is successful in getting this Motion granted, he will then be able to commence (or continue) any Landlord Tenant proceeding in state court to have the Debtor evicted from the premises. However, because the Tenant also has some safeguards in the Chapter 11, a Motion to Vacate Stay if made too early in the case may not be advisable, as the Bankruptcy Code allows the Debtor a certain time frame to decide whether it wants to retain the Lease.

An operating brick and mortar company usually requires a physical location in order to conduct business. Since the purpose of a Chapter 11 is for the Debtor to confirm a successful plan of reorganization and stay in business, it would be helpful if the Debtor is able to remain in possession of the premises under the terms of the lease to accomplish that goal.

So, if the Debtor in a Chapter 11 Case successfully assumes the Lease, the Landlord will be made whole. All defaults prior to the Bankruptcy will be cured, and the Debtor continues to make the monthly payments due under the Lease and then hopefully confirms a Chapter 11 Plan of Reorganization, so everyone walks away happy.

Unfortunately, like the weather, not every day in Chapter 11 is a sunny one. Suppose in our present scenario that despite its intentions, the Debtor does not have the financial wherewithal to assume the Lease within the initial 120 and then subsequent 90-day time frame. You as Landlord no longer wish to extend the Debtor’s time to assume or reject, and so the lease is now considered rejected. You are no longer receiving rent under the Lease nor will you be as a result of the rejection. Usually this is the death knell of a Chapter 11  Debtor. Since the lease is rejected, they will no longer be able to conduct operations from the premises and will probably cease doing business as a going concern. The Office of the United States Trustee (which oversees and supervises Chapter 11 cases) will probably thereafter make a motion to dismiss or convert the case to Chapter 7. There is of course the possibility that the Debtor finds a new place to operate at a different location with a new landlord under a different lease, which will allow you to re-let the premises to a new tenant under a new lease-but that seems highly unlikely), so where does that leave you as the Landlord of a rejected lease?

Under 11 U.S.C. Section 365(g), the rejection of an unexpired lease for non-residential real property is deemed to be a breach of the lease which occurred one day before the Debtor’s Bankruptcy filing. The landlord is entitled to file a multi-tiered claim for payment against the Bankruptcy Estate delineated as follows:

As we have ascertained, the lease has now been rejected.

Not so fast. The landlord’s rejection damages claim is “capped” for a certain amount. It is not simply a mathematical calculation of the monthly rent multiplied by the number of months remaining under the terms of the lease.

Under 11 U.S.C. Section 502(a)(6) of the Bankruptcy Code, the Landlord would be entitled to a “rejection damages” claim for any future rent due under the Lease limited to the greater of one year’s rent or 15% of the rent due under the remaining term of the Lease, not to exceed three years rent. The landlord would also be entitled to any rent owed to it prior to the Debtor’s Bankruptcy filing.

The general purpose of the rejection damages “cap” under 11 U.S.C. Section 502(b)(6) resulting from Debtor’s termination of real property leases is to provide the landlords with some remuneration for the loss of rent due to them under the remaining terms of the rejected lease. However, because that amount can be quite substantial depending on the remaining terms of the lease, this amount is “capped” in order to ensure that other creditors receive a larger distribution towards their unpaid claims from the Bankruptcy Estate

You as landlord now decide to file a Proof of Claim with the Bankruptcy Court for the unpaid amounts due to you under the Lease to include not only what was owed to you before the Debtor’s Chapter 11 filing but for your “rejection damages” as well.

Under the formula, the landlord is entitled to the greater of one year’s rent or 15% of the rent due under the remaining term of the Lease, not to exceed three years rent

Accordingly, the Landlord’s “rejection damages” claim under the lease would be $70,000.00, consisting of the following:

Regardless of whether the Debtor assumes or rejects the lease, it is always advisable that the Landlord file a Proof of Claim with the Bankruptcy Court evidencing any amounts due it under the Lease prior to the Debtor’s Bankruptcy filing.

Suppose you have a scenario where you as landlord are renting a house to an individual, who then files a Chapter 7 Bankruptcy. Where does that like you as Landlord?

Like most of the rules similar to a Chapter 11 scenario, upon the Debtor’s Chapter 7 filing the automatic stay is activated and you cannot commence or continue a landlord tenant proceeding in state court to evict the Debtor from the premises.

With regards assumption and/or rejection, unlike the non-residential lease, the Chapter 7 Trustee has only 60 days to assume or reject a lease for residential real property under 11 U.S.C. Section 363(d)(1). Since a lease for an individual Debtor’s home has very little economic value, the Chapter 7 Trustee generally allows the lease to be rejected. Moreover, since most Chapter 7 cases are relatively quick-(lasting usually only 3-4 months in No-Asset cases), the landlord is not usually hindered. Most times, the landlord in the individual Chapter 7 usually waits out the Bankruptcy case until the Debtor receives his Chapter 7 discharge and the case is then closed. Once that happens, the Chapter 7 case is essentially over. The automatic stay then ends, and the landlord can then commence collection activities to recover possession of the premises.

Let’s suppose however that you as landlord commenced a landlord tenant proceeding well in advance of the Debtor’s bankruptcy filing an obtained a warrant of eviction? Are you still prevented from the automatic stay?

If the landlord obtained a judgment for possession of residential property prior to the Bankruptcy Filing, this judgment must be listed on the Debtor’s bankruptcy petition along with the name and address of the landlord lessor.

The Debtor then has 30 days from the filing of the Bankruptcy Petition to file a Second certification (the “Second Certification”) that the Debtor has cured and paid the landlord all of the rent that led to the landlord obtaining the judgment for possession against him.

The landlord may also be able to move against the tenant quicker if he has already obtained a judgment of possession by filing an immediate objection to the Debtor’s certification. If that occurs, the Court must hold a hearing within ten days of the landlord’s certification to objection.

If the Debtor files the First Certification, but not the Second Certification, then the automatic stay is vacated 30 days after the filing of the Bankruptcy petition.

Suppose you commenced a landlord tenant action in state court against the Debtor Pre-Bankruptcy based upon the fact that the Debtor is using the residence as a drug den to sell non- prescription opioids or other controlled substances (or non-controlled/illegal substances) from the premises. If you file a Certification that the Debtor is conducting such activity on the premises, the automatic stay will not apply.

As you can see, a Bankruptcy filing has both advantages and disadvantages for both Landlords and Tenants. If you find yourself in such a situation, call The Law Office of Ronald D. Weiss, P.C. to discuss your Bankruptcy Law Landlord Tenant matter with us at your convenience.