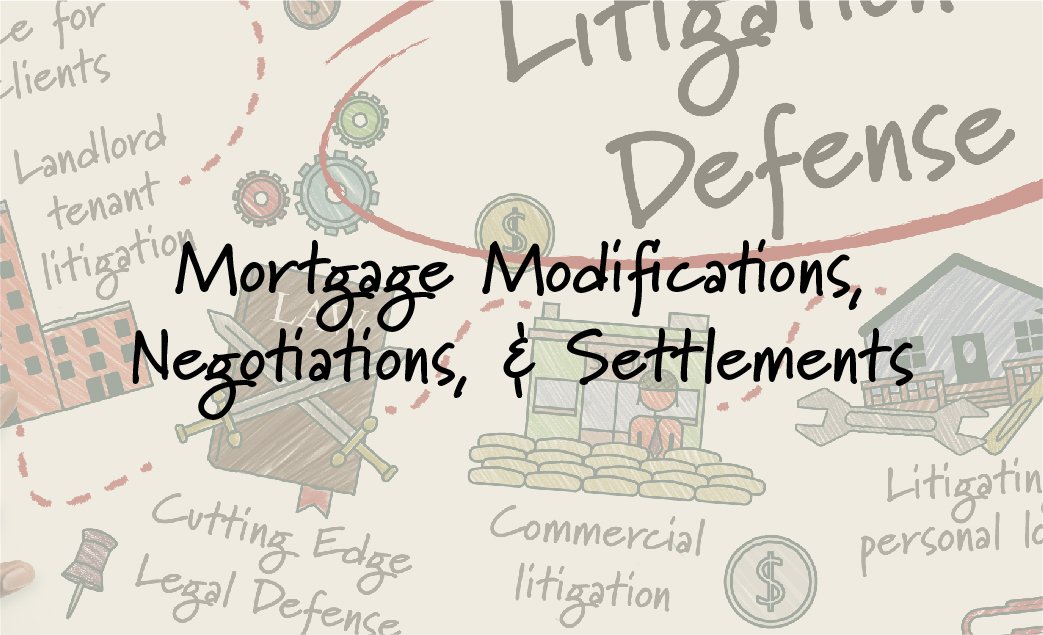 Negotiations with the lender can be pursued prior to the time a foreclosure proceeding starts and/or after it has already started. It is important for homeowners in foreclosure, or threatened by foreclosure, to maximize their possibilities for a negotiated settlement, including a loan modification by making such negotiations part of their overall strategy in terms of resolving the foreclosure. While mortgage modifications are by far the most sought after type of settlement, there are several other possible arrangements that can work for clients in various situations. The section below is a brief overview of various types of negotiated settlements, including modifications. For more detail about Modification and Negotiation Solutions, in general, and Mortgage Modifications, specifically, click here for sections in this website (see links that are part of this text) that are focused on dealing specifically with such subjects.

Options as to Negotiated Settlements of a Mortgage can Include –

Many homeowners experiencing financial hardship with their mortgage payments are realizing that it is important to obtain representation from experienced attorneys in seeking a mortgage modification and to handle what has become a complex and often difficult negotiation process. Such negotiations can be uncertain because many mortgage holders and their attorneys are not sufficiently responsive or fair in assessing modification applications and because a mortgage holder’s acceptance or denial of a modification application is voluntary. Although the negotiations are usually time consuming and often have many challenges, the goals of  better mortgage terms – in terms of the duration of the loan, its interest rate and potential deferment of some arrears – are very worthwhile.

Mortgage loan modifications were always an option for borrowers in arrears but until the recession of 2008-2014, this was not a popular option, that was routinely suggested and frequently offered by lenders. Therefore, it was not  a regular option for borrowers in arrears until the severity of the last recession, which was mortgage loan driven, caused the Federal government and lenders to offer Mortgage Loan Modifications as regular options to be considered in most mortgage loan foreclosures. The goal of Mortgage Loan Modifications was to avoid foreclosure by restructuring the mortgage to combine it with the arrears and allow for an affordable, resumed monthly payment. The method of accomplishing this goal was to combine the principal of a loan with the arrears on the loan in order to absorb the missed payment arrears and join them with the principal resulting in a larger loan balance with better terms:  a lower interest rate,  a longer loan duration and with possibly some arrears deferred till the end of the loan. Under legislation passed during February of 2009, the Federal government had enacted a voluntary program to help homeowners facing “hardship” in paying their mortgage: The Home Affordable Modification Program (“HAMP”), was enacted to encourage mortgage lenders to modify mortgages for the “at risk” homeowner. The HAMP program expired on December 31, 2016, but it inspired lenders to have similar “in-house” modification programs which were more within their control and less subject to government regulation. Under HAMP and the “in-house” Modification programs the arrears on a mortgage would be combined with the remaining principal balance, with the interest reduced and the loan term extended, effectively creating a larger loan where the monthly payments are less. While the HAMP program had expired at the end of 2016, it has has been largely replaced by the system of non-HAMP private bank modifications that almost every major lending institution offers. Whereas before borrowers needed to first be screened for a potential HAMP modification and only if they did not qualify for HAMP would the in-house modification be considered, now the “in-house” options offered by the particular lender are the only modification options available.

The requirements to qualify for most “in-house’ modifications is similar to the qualification for HAMP and are as follows:
• The loan must be a lien on the homeowner’s real property;
• The loan must be in default or in imminent default; and
• The loan default must be due to a hardship faced by the homeowners / borrowers but their finances need to be able to now sustain a payment level that is usually only slight less than the original monthly payment.

The methods by which lenders may help homeowners under “in-house” modifications are as follows:

• Mortgage arrears (including escrow arrears and the costs/fees from any legal proceedings if applicable) are absorbed into the principal balance creating a new loan that is larger in its new principal amount than the original loan, but is no longer in arrears and has better terms as to interest (which is lowered) and the duration of the loan term (which is extended), resulting in a monthly payment that is usually slightly less than what the borrower paid prior to their default.;
• Lenders may extend the loan term up to a term of 40 years; and/or
• Lenders may provide for deferment of some loan arrears in the form of a large balloon payment at the end of the loan term.
Most institutional lenders, offer several “in-house”programs, which are often modeled after the former HAMP program, but are less regulated than HAMP.  Because navigating through these programs and dealing with the lenders’ bureaucracy can be difficult, successful modifications usually involve the client retaining a qualified professional, working on their behalf, and a concerted and a persistent campaign to urge the lender to modify a particular mortgage loan.

In the sections in this site focusing specifically with Modifications and Negotiations, these options are explored in more detail.

Short Sales require the Borrower in arrears to find a potential Buyer for the distressed property who willing to offer an amount to the Lender that is less than what is owed on the mortgage loan, but sufficient to the Lender given litigation issues, cost and delay, so that the Lender is willing to allow the Borrower sell the Property, and willing to close without the full payoff amount due on the loan. The Borrower is released from a possible deficiency judgment in return for the Borrower’s expediting the sale and transfer of the property.

A Deed In-Lieu Agreement is an agreement by the Homeowner(s)/Borrower(s) to surrender the deed to the Lender to avoid a foreclosure proceeding from commencing or from continuing. Such an agreement is usually an option where the Borrower does not need to to stay at the premises and mainly wishes to end its potential liability for a deficiency and its responsibility to insure and care for the premises.

The Cares Act has allowed debtors affected by Covid-19 to withdraw funds from most  retirement plans without a penalty. The result is that a client needing to resolve a particular debt can obtain an aggressive reduction of debt with a lump sum settlement or with a potentially large down payment. Covid-19 has made some creditors more flexible to aggressive settlement proposals in that there is more of an eagerness to resolve debts in exchange for such lump sum settlements. The Cares Act has also improved credit rating requirements so that a person affected by Covid-19 who falls behind with payments and gets into an agreement to catch up with arrears caused by Covid-19 will not have their credit negatively affected; instead the creditor will report them as current. Finally if a debt was caused and/or affected by Covid certain mortgage lenders have offered forbearances, federal student loans have offered deferrals of payments and certain other lenders have offered other concessions. However these possible approaches Covid-19 related concessions by creditors vary greatly and need to be negotiated in a manner where there is a clear path forward for the borrower.

Lenders have been more willing to give modifications during a period for national crisis and economic hardship. Generally lenders have easily  given forbearances during the pandemic. Most have not committed themselves to forgiving the debt, rather at the end of the forbearance they would determine how and over what time are the borrower can reinstate and have offered borrowers needing to defer payments to apply for a modification. The Cares Act has allowed debtors affected by Covid-19 to withdraw funds from most  retirement plans without a penalty. The result is that a client needing to modify a mortgage can improve their chances of obtaining a modification with a down payment.

• Persistence and assertiveness;
• Modification and negotiation experience;
• Legal expertise, additional leverage and a broader approach encompassing other manners of pressure.

The Law Office of Ronald D. Weiss, P.C. regularly represents its Long Island and New York clients in modifications and other negotiations with mortgage holders, and can review with you issues relevant to your foreclosure matter and how a modification or a negotiated settlement with your mortgage holder could help you.

Our consultations are free, the advice may be invaluable.
Please call us at (631) 271-3737, or e-mail us at weiss@ny-bankruptcy.com for a free consultation with an attorney, at our Melville, Long Island law office to discuss how modification or a negotiated mortgage settlement can potentially resolve your foreclosure situation.

“For our mortgage modification we found the Law office of Ronald Weiss through a Google search. Prior to retaining Mr. Weiss, our lender sent a mod approval, but did not honor the agreement. Ron was able to resolve the issue better than we had hoped. Our matter was handled very professionally and his office staff was promptly available. Ron’s services will definitely be recommended by us to family and friends in need.”

Review
by: David F.
Reviewing: Long Island Mortgage Modification Lawyer
Date
published: 2020-02-10
Rating: ★★★★★
5 / 5 stars
*DISCLAIMER: Please note that every case is different
and presents its own unique set of variables. Thus, no guarantee can be made that you will obtain the same or similar
result as a previous client.