Understanding How Student Debt Became a 2016 Presidential Campaign Issue: The History Of Long Island’s Treatment Of Student Loans In Bankruptcy 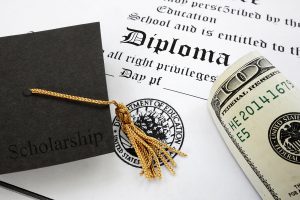 With presidential candidates calling for an end to the crushing burden of student debt, some higher education experts have again questioned the federal policy that makes it nearly impossible to discharge student loans in bankruptcy. In order to understand how student debt became a 2016 presidential campaign issue, it is important to analyze New York student loan statistics as well as the connection between those loans and federal and state bankruptcy laws.
New York Student Loan Statistics
The Institute for College Access[1] and Success provides that 7 in 10 seniors (69%) who graduated from public and nonprofit colleges in 2014 had student loan debt, with an average of $28,950 per borrower. Over the last decade, from 2004 to 2014, the share of graduates with debt rose modestly (from 65% to 69%) while average debt at graduation rose at more than twice the rate of inflation.  The Consumer Financial Protection Bureau[2]  estimated that outstanding debt was approaching $1.2 trillion as of May 2013. They also estimated that student loans guaranteed or held by the federal government had crossed the $1 trillion mark[3].  In 2011, the Bureau released findings revealing that total outstanding student loans were approximately $1 trillion as of the end of 2011[4]. The 20% growth in student loan debt from the end of 2011 to May 2013 was much faster than growth in revolving credit products.  Student loans now comprise the second largest form of consumer debt behind home mortgages with data from the New York Federal Reserve[5] showing that 65 percent of student loans are held by Americans younger than 39, while people age 40 to 59 hold another 30 percent.
In the past two decades, the nation has gone from a system of financing higher education primarily through public investment, grant aid, and modest family savings, to one in which the majority of graduates take on debt. Currently, of all federal Direct Loans not currently held by students in school or in a grace period, nearly 7 percent (totaling $42.5 billion) are currently in default[6].  The sheer amount of borrowers struggling to repay loans speaks to a need for failsafe protections for borrowers who clearly cannot meet their debt obligations in a regular or timely manner, if ever.  Where other consumer debt is concerned, such a failsafe already exists in our long-standing legislation and jurisprudence surrounding bankruptcy. But despite the rise in student debt, student loans are treated differently than almost every other form of debt incurred by American households.
A Timeline of Long Island Student Loans and Bankruptcy

Long Island Student Loans and the Purpose of Bankruptcy
The U.S. system of bankruptcy, at a fundamental level, is about resolving the problems that arise when a person who has borrowed money becomes unable to repay his or her creditors. Bankruptcy law embodies a societal recognition that holding people to unpayable debts can be individually devastating and creates enormous social and economic costs.  Excluding student loans from the bankruptcy system flies in the face of centuries of sensible bankruptcy policy and threatens the economic mobility and risk-taking that has made the American economy so dynamic. Further, making federal student loans dischargeable in bankruptcy reflects that economic success often depends on factors that are outside of an individual student’s control. Rather than imposing all of the risks of a bad job market on private individuals, the federal government has an incentive to minimize that risk through both front-end investments through grant aid, as well as back-end relief through debt relief. Having an educated population has broad and powerful societal benefits, and society should share some of the risk currently borne almost entirely by students.
Proposed Reform: Repeal the Student Loan Exception
The most straightforward way to end the student loan exception would be to simply strike the student loan exception from Section 523(a)(8) of the Bankruptcy Code.  This would eliminate the provision requiring individuals to demonstrate an “undue hardship” to a bankruptcy court. As a result, student loans would be normally dischargeable alongside other unsecured consumer loans.  Any attempt to discharge a student loan would remain subject to all of the other provisions of the Bankruptcy Code, including the provisions designed to prevent abuse of the system. Individuals with student loans would still have to satisfy the same Chapter 7 “means test” as other borrowers, meaning that discharge would only be available to those individuals who, based on their monthly income and expenses, truly cannot pay their debts.  It should be noted that this proposal was initially made by the 1997 National Bankruptcy Review[8] Commission (“NBRC”), a nonpartisan commission established as part of the 1994 Bankruptcy Reform Act and whose members were appointed by the President, Congress, and the Chief Justice. In summarizing the rationale behind its recommendation, the NBRC stated that treating student loans like all other forms of unsecured debt “would be consistent with federal policy to encourage educational endeavors.”
U.S. Supreme Court’s Refusal to Review Case Acts as Nod to the Current Difficulty in Discharging Student Loans
In January of 2016, the United States Supreme Court[9] declined to hear an appeal by a would-be lawyer who had been seeking to discharge more than $260,000 in business and law school debt in bankruptcy. Mark Tetzlaff, 57, graduated from Florida Coastal School of Law, but has repeatedly failed the bar exam. He said in papers filed in his Chapter 7 case that he could not repay the student loans due to alcoholism, depression and a criminal record that blocked him from getting employment.  The refusal of the Supreme Court to hear the case leaves in place an arguable circuit split between federal appeals courts concerning the proper standard to be applied to determine whether the requisite “undue hardship” exists when a debtor seeks to discharge student loans. For federal courts overseeing Tetzlaff’s bankruptcy case[10], including the Chicago-based 7th U.S. Court of Appeals, his failure to make loan payments over an extended period appears to have played a significant role in determining that he does not qualify to have these student loans erased.  However, if a more lenient test used by the St. Louis-based 8th U.S. Circuit Court of Appeals had been applied to Tetzlaff’s case, the result may have been different.
An Argument Can Be Made for Reform of New York Student Loan Dischargeability
Some argue that allowing the dischargeability of student loans in bankruptcy makes sense both as economic policy and education policy. As a nation, we want an educated populace and earning power and employment opportunities increase dramatically with a college degree. In some cases, though, degrees come at a cost that exceeds their value, and in others, students are obligated to take on debt but do not end up graduating. These cases can result in years of financial distress and can suppress overall economic growth.  In those limited instances, bankruptcy law reform would provide individuals who worked hard, attended college and accepted federally-approved student loans, with the peace of mind that, in the worst of circumstances, those loans will not stay with them for the rest of their lives.
Possible Remedies Pending Reform of Dischargeability
It is important to note that there may be steps that can be taken even as New York residents wait for reform of student loan dischargeability.  For example, Chapter 13 bankruptcies can act as an interim solution, allowing a percentage plan to pay a pro rata of debt (i.e. 10% or more over a 5-year plan with monthly payments).  Because a Chapter 13 plan can be repeated as long as an individual cannot pay the debt in full, this option can serve as a partial solution with regard to student loans.
Bankruptcy laws can be complicated and difficult to apply to an individual case. If you have a student loan and cannot pay your debts, you need a greater Long Island and New York area bankruptcy attorney who can interpret and apply federal and New York laws to best protect your interests.  Call the office of Ronald P. Weiss today at (631) 296-0361 in order to discuss the specifics of your financial situation and possible bankruptcy solutions.
References:
[1] http://ticas.org/posd/map-state-data-2015
[2] http://www.consumerfinance.gov/newsroom/student-debt-swells-federal-loans-now-top-a-trillion/
[3] https://studentaid.ed.gov/sa/about/data-center/student/portfolio
[4] http://www.consumerfinance.gov/blog/too-big-to-fail-student-debt-hits-a-trillion/
[5] http://libertystreeteconomics.newyorkfed.org/2015/04/just-released-press-briefing-on-student-loan-borrowing-and-repayment-trends-2015.html#.VsiAodaaCu6
[6] http://files.consumerfinance.gov/f/201509_cfpb_student-loan-servicing-report.pdf
[7] https://studentaid.ed.gov/sa/about/data-center/student/portfolio
[8] http://govinfo.library.unt.edu/nbrc/reportcont.html
[9] http://www.abajournal.com/news/article/would_be_lawyer_wont_have_260k_in_student_loans_erased_scotus_refuses_to_he
[10] http://www.scotusblog.com/wp-content/uploads/2015/10/Tetzlaff-Petition-and-Appendix-AS-FILED.pdf