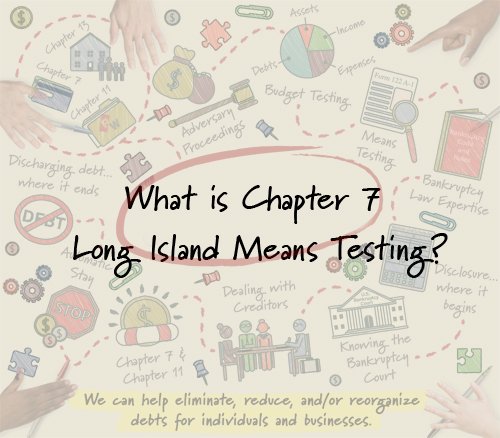 The means test is particularly harsh for Long Island Chapter 7 bankruptcy cases; however, there are strategies for Nassau and Suffolk County Chapter 7 cases that can mitigate the effects of the means test.

One of the most vexing issues for Chapter 7 Long Island Bankruptcy Lawyers are the means testing provisions of the 2005 Amendments to the Bankruptcy Code, which became potent filters to deny Chapter 7 bankruptcy relief to debtors with incomes that are considered too high, or where circumstances otherwise are determined to be abusive. Means testing relies on a complex calculation which goes into effect if the debtor’s gross income over the 6 months preceding the bankruptcy filing exceeds median household income as established by IRS census data which averages household income based on household size in a particular state. Means testing is used in Chapter 7 Long Island cases to determine if a case qualifies for Chapter 7 or whether the case needs to be dismissed or alternatively converted voluntarily by the debtor to Chapter 13. In Chapter 13 debts are not immediately eliminated or discharged, but are reorganized over a five year plan. The means test is also used in Chapter 13 but for a different purpose, which is to determine to what extent the debtor can pay their unsecured debt at a percentage on the dollar in a Chapter 13 plan that pays back debt on a pro-rata basis according to the “projected disposable income”.

For a more detailed description of means testing, which includes cites to the statutory and case law,  click here.

Long Island Chapter 7 bankruptcy attorneys have been particularly challenged by these changes because the economies of Suffolk County and Nassau County are more similar to the economies of Connecticut and New Jersey, than much of upstate New York. As a consequence, the IRS census numbers establishing a median income for New York State severely disadvantage potential Long Island Chapter 7  debtors. Under the website for the United States Trustee, the median income as of 5/1/2022 for the following states based on household size is as follows:

As should be apparent Long Island Chapter 7 cases are more difficult to sustain in terms of an income challenge than cases for similar household sizes in New Jersey, Connecticut, Massachusetts, and Maryland. The difference for a four person household is approximately $20,000. This initial presumption for the means test, that household incomes should be based on a state median, sets the pattern for the entire means test with IRS averages creating presumptive limits to various spending based on state household size averages.

Under the Means Test, What Revenue is Considered “Income”?

The means test seems to be comprehensive in considering all income of the debtor in the six months preceding the Chapter 7 filing, except social security. However, in Chapter 13 a court may be more likely to use a “forward-looking” or “crystal ball” approach in analyzing whether a source of income such as a retirement plan withdrawal is to be included in “projected disposable income” for the purposes of plan payments. However some courts have held that the income in such situations is realized by the debtor at the time the retirement funds are deposited into the retirement account, not when they are subsequently distributed to the debtor. A distribution from the retirement account under this reasoning, is analogous to a transfer from a debtor’s savings account to his checking account. Based upon the above, there are differences in how decisions have viewed income that should be included in debtor’s six month average for disposable income. The particular court’s past decisions as well as whether the case is in Chapter 7 or Chapter 13 are all factors. For general information about Chapter 7, Chapter 13, and/or Bankruptcy Solutions, in general, please click here.

Under the Means Test, What Expenses Could be Deducted?

The Means Test allows for the deduction of certain expenses from the debtor’s income in order to assess whether the debtor impermissibly  exceeded the Means Test.  The contractual requirement to pay secured debt such as a mortgage payment is a deductible expense even if the debtor is in arrears; however there has been a difference in decisions where the debtor has intentions to surrender the property or has already vacated the property.

What “Special Circumstances” Can Overcome the Presumption of the Means Test?

What is the Standard for Assessing Household Size for the Means Test?

Several conflicting tests have been proposed to determine the size of the debtor’s household. One test which seems to be influential with Long Island Chapter 7 trustee’s is the dependency standard of the Internal Revenue Service (IRS) per the debtor’s last tax return. Another test that has been used by bankruptcy courts has been the “heads on the beds” test which evaluates how many persons actually residing in the debtor’s home. However, the test that seems to be gaining ground is the “single economic unit” test which evaluates if the non-debtor and debtor share household expenses and income. The economic unit test looks at seven factors to evaluate the degree of financial support, sharing of expenses/income, extent of joint property/liabilities, and any other financial intermingling or interdependency.

Even where the Chapter 7 debtor passes the means test, the debtor may still have issues with expenses by the debtor or income earned that are considered to be in bad faith and abusive. To determine this, the court considers the “totality of the circumstances”. Often the court looks at large purchases made or luxury items purchased before the filing of a Chapter 7 case or large additional income to be received after the filing.

Passing the means test for some cases that are significantly over the six month median can be difficult for residents of Nassau and Suffolk Counties contemplating a Chapter 7 bankruptcy case. The legislative goal is to cause the debtor and his attorney to instead file a Chapter 13 case where on Long Island there is a more favorable approach to the means test so as to potentially allow the debtor to pay a relatively small percentage of their debt in Chapter 13 rather than to completely eliminate the debt in Chapter 7. While planning  for a bankruptcy case is allowed under the case law, such planning should not be so blatantly manipulative as to cause the case to potentially be dismissed as a “bad faith” or “abusive” filing.  If a potential Chapter 7 Nassau County or Suffolk County client is “border line” as to the means test it is important to see how close they are to passing and whether the effort to try to file them in Chapter 7 is realistic.

If a possible Chapter 7 debtor is potentially close to being qualified to file than a certain amount of planning, potentially over time, can be initiated to try to have the case “fit” into Chapter 7. The Law Office of Ronald D. Weiss, P.C. can help a client strategize to pass the means test as follow:

1) Firstly, all income must be reviewed from the debtor’s pay stubs and bank statements and tax returns from the previous six (6) months. To the extent there are variations with the income, the debtor should strive not to engage inactions that cause income to unusually increase or to raise amounts shown beyond standard, necessary amounts.

3) Thirdly, the number of household members needs to be accounted for and if there is a borderline situation, with family living in the house, than under the various tests it should be considered with the goal of trying to add members to the household who are dependent but do not contribute much income.

5) Fifthly, the client’s prospective yearly income tax refund or tax due under the tax return as divided by twelve over the year will either raise or lower the computed tax deduction.

6) Sixthly, when all else fails file in Chapter 13 and try to get a plan with low pro-rata monthly payment; if you can’t sustain the Chapter 13 the conversion to Chapter 7 will allow for a case that should be easier once converted than one initially filed directly in Chapter 7.

For a more detailed description of means testing, which includes cites to the statutory and case law,  click here.
The Law Office of Ronald D. Weiss, P.C.  represents Nassau and Suffolk County Chapter 7 clients. Even prior to assessing whether a Chapter 7 Long Island case is possible and advantageous, an experienced bankruptcy lawyer will discuss with you the major factors in deciding whether your situation can qualify for a Long Island Chapter 7 bankruptcy case and how such a case could  eliminate and/or reorganize your debt.

Please call us at (631) 271-3737, or e-mail us at weiss@ny-bankruptcy.com for a free consultation with an attorney at our Melville, Long Island law office to discuss your specific situation and whether a Chapter 7 bankruptcy case may help you.