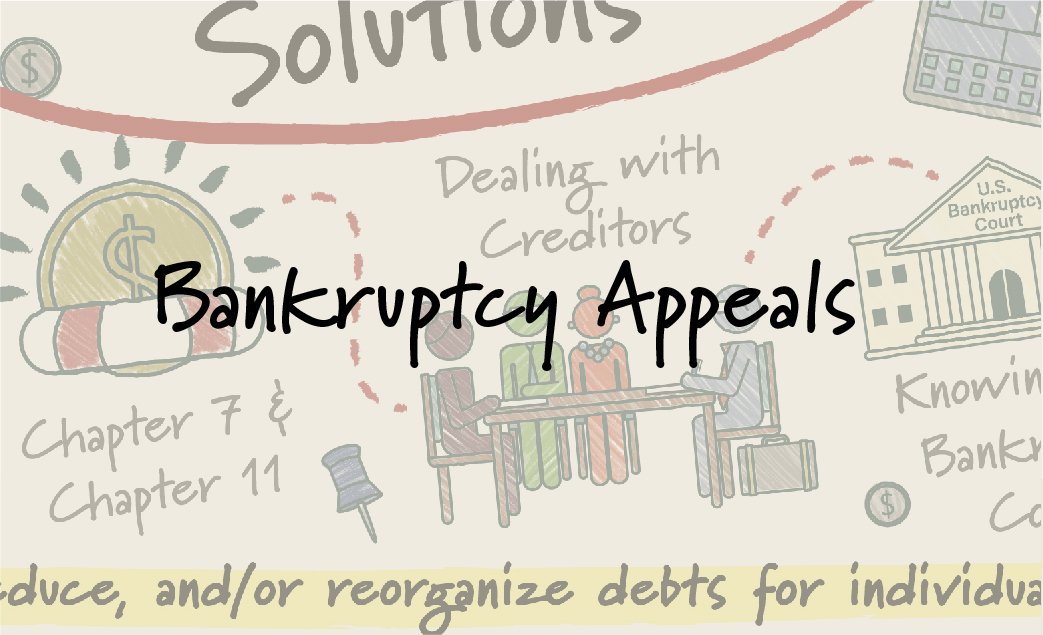 A Bankruptcy Appeal can potentially set aside and/or improve an unfair or erroneous decision that may be critical to a debtor’s bankruptcy case.

An appeal from the Bankruptcy Court is substantively and procedurally challenging and requires a high level of knowledge, expertise and skills in the bankruptcy area and in appellate advocacy. Therefore, a bankruptcy appeal can potentially be a powerful tool in a bankruptcy matter, because if it is handled correctly, it gives advantages to law firms, like ours, which are comfortable in advocating in a more challenging appellate environment that focuses on bankruptcy law and procedure.

When to Take a Bankruptcy Appeal?

Bankruptcy Appeals allow appellate review to a debtor believing that that a Bankruptcy Judge was unfair and/or had erred in deciding their case. Usually the decision appealed from is critical to the bankruptcy case and has facts that are complex or unclear and may have been misconstrued by the Bankruptcy Judge and/or bankruptcy statutory and case law is not settled as to the relevant issues decided by the Bankruptcy Court and as a result has divided cases interpreting the law differently. This situation presents a worthwhile opportunity for an appeal where we can either reverse/improve an unfavorable bankruptcy court decision and/or enhance our position in terms of time, leverage and/or momentum.

How do Bankruptcy Appeals Compare to Appeals from the NYS Supreme Court?

Bankruptcy Appeals are different than appeals from decisions of the New York State Supreme Court, in that the Bankruptcy Court, as a specialized federal court, is generally much more demanding as to the familiarity with procedure, the law and advocacy skills, than the NYS Supreme Court, which is a court of general and broader jurisdiction. The appellate briefs that accompany a Bankruptcy appeal tend to generally show a higher intellectual level of argument, in that Bankruptcy Appeals involve not only interpretation of the Bankruptcy Code and Rules, but sometimes the Federal Rules of Evidence, the Federal Rules of Civil Procedure, The Local Bankruptcy Rules for that District and even applicable state law. Bankruptcy law is a highly developed but still narrow and specialized area of law which is dynamic and constantly evolving based on legislative changes and changes in our society and economic realities. Therefore, there are many areas of bankruptcy law that are unsettled which could be ripe for an appeal under the right set of circumstances. The procedural rules in the bankruptcy area are also more demanding in having sharper and less lenient deadlines.

The Procedure to Take a Bankruptcy Appeal –

A bankruptcy appeal requires: 1) the filing of a notice of appeal to initiate, 2) a record on appeal, and 3) an appeal brief or memorandum of law.

A Notice of Appeal from the Bankruptcy Court’s final judgment (in a Bankruptcy Case, Contested Motion and/or Adversary Proceeding) must be filed and served on the appellee within 14 days of when an appealable order is entered on the docket. A Notice of Appeal is a short statement which states the order, decision and/or judgment which is being appealed and gives the names of the appellant and the appellee and their respective counsel.

Within 14 days after the Notice of Appeal becomes effective, the appellant must file and serve the Designation of the items to be included in the record on appeal and a statement of the issues to be presented on appeal. When the record is complete, the Clerk of the Bankruptcy Court then transmits to the higher court all of the documents filed in connection with the Appeal. Here, the advantage of an appeal in Bankruptcy Court is that the clerk’s office is indirectly able to assist in setting aside the previously filed documents relevant to the appeal. This is makes the Bankruptcy appeals process comparatively easier than an appeal from an Order issued by the NYS Supreme Court, since an appeal of a state court order requires a printed record of all documents relevant to the appeal.

Within 30 days after the docketing of the notice that the record has been transmitted or is available electronically, the appellant must serve and file a legal brief supporting their appeal. The memorandum on appeal is the debtor’s legal argument as to why the decision of the bankruptcy court was in error. The timing of the brief is much shorter than with appeals from the NYS Supreme Court, which allow six (6) months to file the appellate memorandum. The quicker deadline makes a bankruptcy appeal more relevant and powerful in that the parties and the Bankruptcy Judge on the case are all aware that a decision from the United States District is forthcoming and may critically alter the direction of the bankruptcy matter. The appeal generally proceeds at a relatively brisk pace in that the appellee has similar deadlines – to supplement the notice on appeal and the record and to file its opposition brief – which commence after the appellant has served and filed their initial documents.

If an appeal to the Second Circuit Court of appeals is also denied, a party has one final chance to appeal a decision, which would have to be before the Supreme Court of the United States of America.

The Substance of A Bankruptcy Appeal – 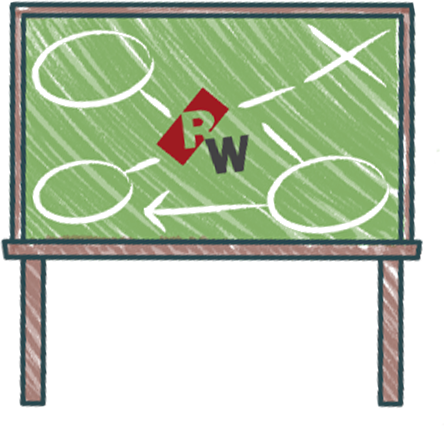 a) Clear Error of Factual Findings – The standard of “clear error” is met when the reviewing court is left with a definite and firm conviction that a factual mistake was made, despite having some evidence to support the conclusion reached by the lower court. The standard of “clear error” does not give the appellate court as much discretion over factual findings as with legal conclusions, where the appellate court can come to a totally independent conclusion. There are different kinds of facts as follows in this analysis: i) “Basic Facts” – names, dates, and events; ii) “Inferred Facts” – drawn as inferences and probabilities based on Basic Facts; and iii) “Ultimate Facts” – are facts with a great deal of description and expressed in the language of legal conclusions, for example saying that a person “was negligent in doing…” While Ultimate Facts seem factual, they really reach a legal conclusion and therefore are regarded as legal conclusions. Basic and Inferred Facts should not be disturbed by the Court unless they are “clearly erroneous”. However, Ultimate Facts are composed of a mixture of facts and law and are therefore subject to “de novo” review.

b) De Novo Review of the Law – Sometimes it is hard to tell if the proper question is one of facts or one of law. It is advantageous, for the appellant, to try to categorize questions as involving “Ultimate Facts” or mixed questions of law and fact to allow the Appellate Court to engage in a fresh or “de novo” review. For the appellant a new review is always better than being stuck with disadvantageous factual findings which need to be clearly erroneous to be set aside. There is therefore an incentive for the appellant to cast all important questions in the case as involving a legal controversy or if they involve facts that they involve “Ultimate Facts”.

c) Standard of Review – The appellant, in its legal brief, wants to cast questions as ones based on law or a mixture of law and fact (and involving “Ultimate Facts”) therefore allowing “De Novo” Review by the Federal District Court. The appellee tries to do the opposite, to show that the controversy is over factual questions that involve no or little law (“Basic” and “Inferred Facts”) and therefore deference needs to be shown to the Bankruptcy Judge and his decision should not be disturbed unless it is “clearly erroneous”.

d) Legal Brief or Memorandum of Law – Fortunately for most appellants, bankruptcy statutes and cases are often ambiguous and leave room for varied reasonable interpretations. Therefore it is often that the questions before the Federal District Court can be reviewed as legal issues on a “De Novo” basis. There is a great deal of room for intellectual debate over the meaning, intent, history and context of bankruptcy statutes and rules and there is a rich supply of intellectually strong but divided bankruptcy cases interpreting the same statutes. This gives room for sharp debate and legal creativity as to how the facts of the case and the relevant law interact to arrive at a decision that may be similar or different than the one appealed from by the Bankruptcy Court. The legal briefs in an appeal from the Bankruptcy Court need to be at a high level of advocacy and are the heart of a Bankruptcy Appeal.

The Potential Benefits of Taking a Bankruptcy Appeal and Our Role –

The advantage of filing an appeal in a bankruptcy case is that bankruptcy decisions often involve unsettled law and unclear facts that allow for different opinions and conclusions as to the correct outcome of case. Many statutes have been interpreted differently by different bankruptcy judges, with the result being an opportunity to appeal, which could set aside a decision and/or give a debtor time/leverage in their matter. In a contest with a Chapter 7 or 13 or US Trustee, the debtor may be much more motivated to reverse a ruling, than the Trustee is in supporting the ruling. The debtor often may have an advantage in appealing in that it is usually the main party affected by a decision. Additionally, due to the requirements under the Bankruptcy Rules for appeals which are applicable to both sides, the prospect of protracted and extended litigation in prosecuting the appeal may serve as a catalyst for both parties to obtain an amicable resolution of the issues relative to the appeal.

However, even if we have a creditor as the appellee, on the other side of the appeal, our law office is fond of appeals because our research and writing and argument capacity are excellent and even when we are the underdog in terms of legal position, our skills in in-depth memo writing and research give us strength and often give us an advantage. Even if we can’t obtain a complete reversal of the bankruptcy court, we can mitigate an unfavorable decision and cause the future decisions in a bankruptcy case or adversary proceeding to be more balanced. We have had positive results with bankruptcy cases on appeal, but even where we cannot reverse a decision, an appeal can have advantages in that our efforts can weaken an unfavorable decision and win for us, position, leverage, momentum and respect – all of which can ultimately help us resolve the case.

Our law office takes on complex bankruptcy matters including appeals, adversary proceedings and contested motions where we have had success in representing clients with challenging situations.

Please call us at (631) 271-3737, or e-mail us at weiss@ny-bankruptcy.com for a free consultation at our Melville, Long Island law office to discuss legal options, including Bankruptcy Appeals, in greater detail.