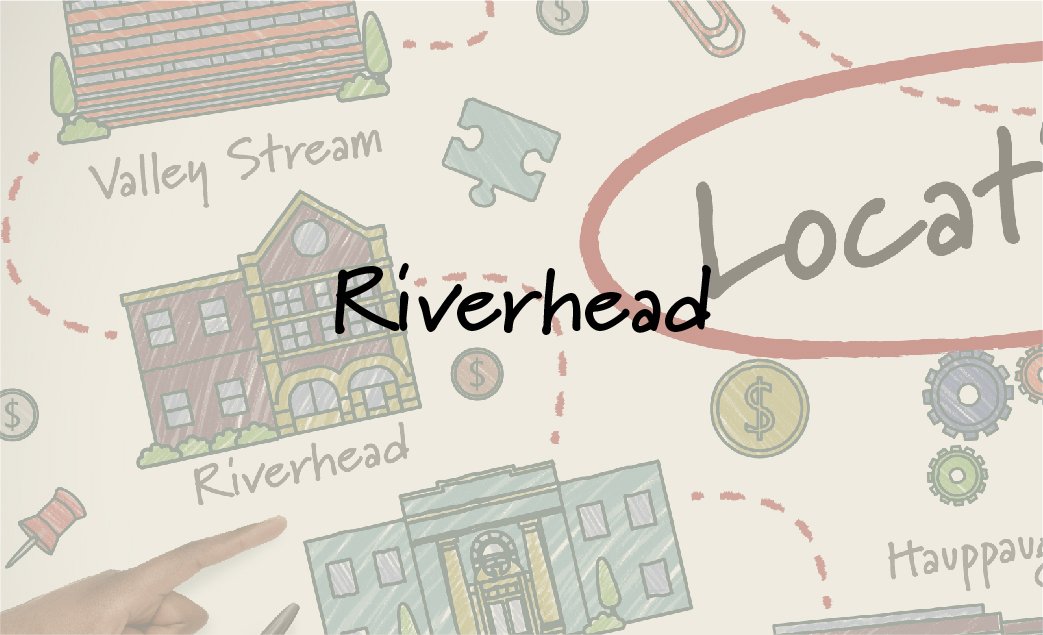 Riverhead was purchased by European colonists from the local Algonquian-speaking Native Americans and Shinnecock Indian Nation in 1649. Located on the north shore of Long Island, Riverhead has been the county seat of Suffolk County since 1727 and the town of Riverhead was created in 1792 as part of new jurisdictions after the American Revolution. The town rests on the mouth of the Peconic River, from which Riverhead receives its name. The smaller hamlet of Riverhead lies within it and is the town’s principal economic center.

During the early 1900’s Riverhead had an influx of Polish immigrants, which led to the creation of Polish Town, a section of the town and county seat where the popular Polish Town Fair is held every year.

Riverhead is the agricultural head of Long Island, with an estimated 20,000 of the 35,000 acres of the island’s farmland located within the town. Riverhead also has beautiful beaches not far from its town – Iron Pier, Wading River, and Reeves Beach. Riverhead is also known for its vineyards, breweries, golf courses, a mega shopping center called Tanger Outlets as well as the Long Island Aquarium which one of its biggest attractions being the 20,000-gallon coral reef display tank. Some of the greatest colleges/universities are nearest to Riverhead, including Suffolk County Community College, Stony Brook University, Dowling College, University of New Haven, and Yale University.

According to the United States Census Bureau, in 2019 Riverhead has a population of an estimated 33,000 people. The approximate median house and condo value is $362,000 with real estate property taxes exceeding $6,500 per year. The average rental cost is nearly $1,500 per month. In 2019, studies showed the percentage of residents living in poverty in Riverhead was about 14.7 percent. Thus, many people in Riverhead may need assistance with debt relief, which can include filing for bankruptcy.

If you’re a resident or business owner in Riverhead and you are drowning in debt, call the Law Office of Ronald D. Weiss to discuss exploring different options to help you pay off your balances. For Riverhead residents, we have an office conveniently located at 30 W Main Street, Riverhead, NY 11901

The Types of Bankruptcy That You Can File For:
Your debt situation will depend on the type of bankruptcy our firm will file on your behalf to help you regain control of your finances.

Chapter 7
A Chapter 7 bankruptcy begins by filing a petition for bankruptcy along with supporting documentation to the court. The debtor will also need to pass the “means test” in order to qualify for this type of bankruptcy. Upon filing, an automatic stay will go into effect which stops all collection attempts and legal claims against you. A Chapter 7 trustee will then determine which of your nonexempt property and assets may be seized and liquidated – which include unsecured debt, medical bills, some tax debts – in exchange for the discharge of the rest of all qualified debts. If your income is low enough and you have certain debts, Chapter 7 bankruptcy can be extremely beneficial.

Chapter 13
Unlike Chapter 7, a Chapter 13 bankruptcy does not involve liquidation of your property but instead requires you to make payments for a certain period of time before obtaining a discharge. After filing, an automatic stay will go into effect to stop collection attempts and legal claims against you. During a Chapter 13 bankruptcy, a trustee will reorganize your debts and require you to make manageable payments to creditors over a three-or five-year term. Once your plan is completed, any remaining qualified debts can be discharged. A Chapter 13 can help you pay off your mortgage and auto debts to avoid foreclosure or repossession.

Chapter 11
Chapter 11 bankruptcy is mostly used by business owners who are trying to remain in operation after bankruptcy. Similar to Chapter 13, debts are reorganized, and the court names a business owner or filer as a “debtor in possession” who performs the functions of a bankruptcy trustee – taking orders from the court and reporting important information to the court regarding your company’s finances. This can be complex because it involves complicated compliance requirements. Thus, it’s important to have an experienced bankruptcy lawyer handling your case to help you receive a successful resolution.

Contact a Riverhead Bankruptcy Lawyer to Discuss Your Options

Any type of bankruptcy can change your life – both for the better and for the worse. That’s why it’s crucial to have an experienced bankruptcy attorney by your side to ensure you get the best outcome possible for your situation. Schedule a free consultation today by calling the Law Office of Ronald D. Weiss at 631-271-3737 or contact us online today. We have an office conveniently located at 30 W Main Street, Riverhead, NY 11901.