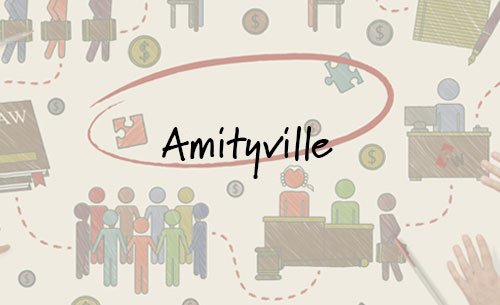 Drawn by the large quantity of salt hay, Huntington farmers first visited Amityville in 1653. Amityville was originally referred to as Huntington Southwest Neck before the name was adopted in 1846 at a village meeting when a mill owner, Sammual Ireland, settled the name debate and suggested that the village be named after his boat, the “Amity,” which means friendly. Amityville became Babylon Town’s second incorporated village in 1894. Since its beginnings, Amityville has been a hub for business and transportation. The Southside Railroad began service to Amityville in 1867, and the Cross-Island trolley line first came in 1909. Amityville is also known for The Amityville Horror which is a true story about six family members murdered in their Amityville house in November 1974.

Over the years, there have been many notable people who were either born or once lived in Amityville, including Alec Baldwin, NFL player Darrel Young, and NBA players A.J. Price and Mike James.

According to the United States Census Bureau, in 2020 Amityville had an approximated population of 9,321 with an estimated medium property value of $410,000, and real estate property taxes to be nearly $10,000 per year, making the cost of living index in Amityville to be quite high.

At the Law Offices of Ronald D. Weiss, we explore debt relief options depending on your situation. One of those options may be bankruptcy to help you regain control of your debt situation.

If you are a resident or business owner in Amityville and you have accumulated debt and are worried about what could happen next, call the Law Office of Ronald D. Weiss to discuss the different options to help you pay off your balances. For Amityville residents, we have an office conveniently located at 166 Broadway, Amityville, NY 11701.

Your debt situation will depend on the type of bankruptcy our firm will file on your behalf to help you regain control of your finances.

During a Chapter 7 bankruptcy, your property and assets will be liquidated in exchange for the discharge of all qualified debts. Essentially, the proceeds from the liquidation will go to the payments that are owed to your creditors. The court will then discharge any leftover balances.

Chapter 13 is known as the “reorganization” bankruptcy and is only available for consumers, not businesses. Instead of paying your debts by liquidation, a trustee will be appointed to reorganize your debts and require you to follow a payment plan with the court. The trustee will put your payments toward priority debts and at the end of your plan, nonpriority debts may be discharged, which will allow you to start over financially.

Chapter 11 is another type of reorganization bankruptcy and is available for businesses that do not want to liquidate and for consumers who have too much debt to qualify for Chapter 13. During a Chapter 11 bankruptcy, you must abide by the Court’s orders and send regular reports to the Court regarding your company’s finances. Business operations can continue during your payment plan and a discharge will be granted at the end of your case.

Contact an Amityville Bankruptcy Lawyer to Discuss Your Options

Bankruptcy allows you to reset your finances and start over with a clean slate, for the most part. However, it’s crucial to contact an experienced bankruptcy attorney to make sure you get the best outcome possible for your situation. The legal team at the Law Office of Ronald D. Weiss will help determine which type of bankruptcy is right for you.

Schedule a free consultation today by calling the Law Office of Ronald D. Weiss at 631-271-3737 or contact us online today. We have an office conveniently located at 166 Broadway, Amityville, NY 11701.