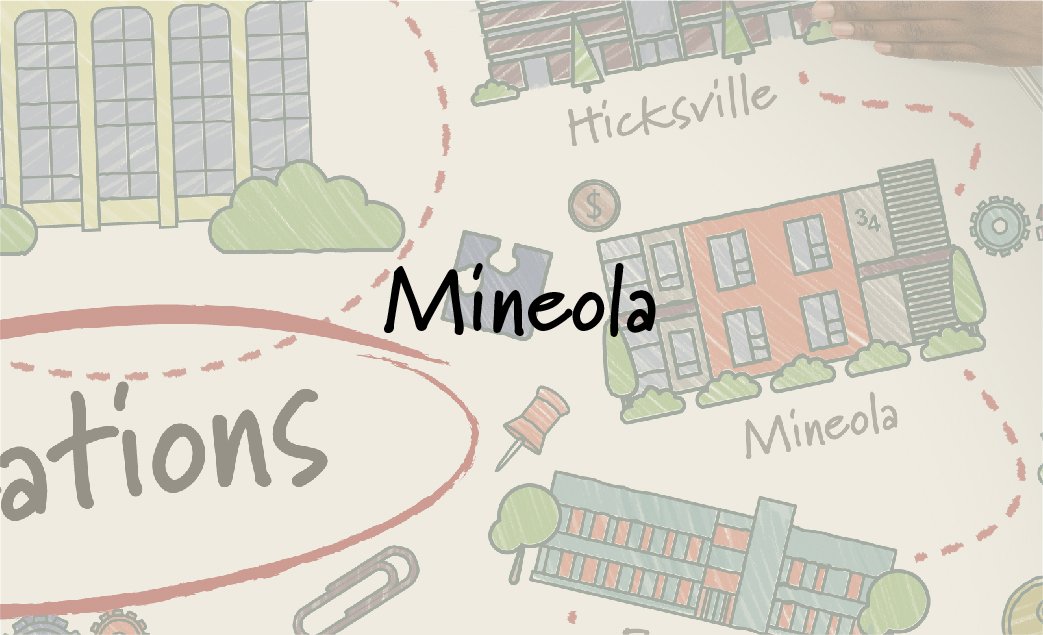 In the early 1600s, Long Island was part of Henry Hudson’s original claim in the name of the Dutch East India Company. In the 18th century, the Dutch and English settlers cleared the farmland to start their life on the Hempstead Plains, which eventually was named after an Algonquin Indian Chief, Miniolagamika meaning, “pleasant village”. The name was later shortened to “Mineola”.

Mineola is especially known for its nationally recognized award-winning hospital – Winthrop Hospital – which was founded in 1896 by local physicians and residents as Nassau Hospital. Winthrop Hospital is Long Island’s first voluntary hospital and was ranked in 2004 as one of the Top 5 Percent of Acute-Care Hospitals in the country.
Mineola is also home to where a historic flight took place. On May 20, 1927, at 7:52 a.m., Charles Lindbergh started his momentous flight from Roosevelt Field, and 33 hours later he landed in Paris marking him the first person to complete a solo flight from the United States across the Atlantic Ocean.

Over the years, there have been many notable people who have either grew up or once lived in Mineola, including actor Brian Dennehy who attended Chaminade high school, The King of Queens sitcom star Kevin James, as well as WNBC correspondent Lauren Scala who attended Mineola high school. A website that ranks schools on actual test scores, www.schooldigger.com, ranks Mineola Union Free School District as 266 of 1,439 New York schools.
According to the United States Census Bureau, in 2019 Mineola had an approximated population of 19,200 with an estimated median house and condo value to be $583,355, median gross rent at about $1,800 per month, and real estate property taxes to be nearly $10,000 per year – making the cost of living index in Mineola to be 156.3 – which is very high as the U.S. average is 100. Thus, many people in Mineola may need assistance with debt relief.
At the Law Offices of Ronald D. Weiss, we explore debt relief options depending on your situation. One of those options may be bankruptcy to help you regain control of your debt situation.

If you are a resident or business owner in Mineola and you have accumulated massive debt and are fearful about what could happen next, call the Law Office of Ronald D. Weiss to discuss exploring different options to help you pay off your balances. For Mineola residents, we have an office conveniently located at 34 Willis Avenue, Mineola, NY 11501.

Your debt situation will depend on the type of bankruptcy our firm will file on your behalf to help you regain control of your finances.

This is the most common type of bankruptcy, mostly because you can obtain a discharge of many debts relatively quickly. During a Chapter 7 bankruptcy, a trustee liquidates any nonexempt property and assets you have in exchange for the discharge of all qualified debts. Essentially, the trustee takes the proceeds from the liquidation and makes payments to your creditors. The court will then discharge any balances that are leftover. In order to qualify for this type of bankruptcy, you must first pass the “means test,” which demonstrates that your income is less than the median income for New York State.

While passing the means test and losing property may not sound all that good, a Chapter 7 bankruptcy has a major benefit—the court can discharge your qualified debts without requiring you to make payments.

If you do not qualify for Chapter 7 or want to protect non-exempt property, Chapter 13 is available for consumers. Chapter 13 is known as the “reorganization” bankruptcy because instead of paying your debts by liquidation, a trustee will reorganize your debts and require you to abide by a payment plan with the court. The trustee will put your payments toward priority >debts. At the end of your plan, non-priority debts may be discharged, allowing you to start over financially. This type of bankruptcy is only available for consumers, not businesses.

Chapter 11 is another type of reorganization bankruptcy and is available for businesses who do not want to liquidate and for consumers who have too much debt to qualify for Chapter 13. A Chapter 11 bankruptcy will involve taking orders from the court and sending regular reports to the court regarding your company’s finances. You will be able to continue business operations during your payment plan and will obtain a discharge at the end of your case. This type of bankruptcy can be extra complicated, so it’s important to have an experienced bankruptcy lawyer by your side to ensure all matters are being handled correctly.

Contact a Mineola Bankruptcy Lawyer to Discuss Your Options

Bankruptcy allows you to reset your finances and to start over with a mostly clean slate. However, it’s crucial to contact an experienced bankruptcy attorney to make certain you get the best outcome possible for your situation. The legal team at the Law Office of Ronald D. Weiss will help determine which type of bankruptcy is right for you. We will also prepare and file the petition as well as communicate with the bankruptcy court and trustee on your behalf.

Schedule a free consultation today by calling the Law Office of Ronald D. Weiss at 631-271-3737 or contact us online today. We have an office conveniently located at 34 Willis Avenue, Mineola, NY 11501.