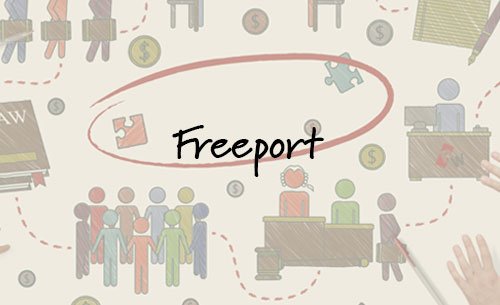 Freeport is a village in the Town of Hempstead located on the South Shore of Nassau County, Long Island. Before people of European ancestry came to Freeport, the land was part of the territory of the Meroke Indians. During the settlement in the 1640s, Freeport was once an oystering community and was called “the Great South Woods” during colonial times. In 1853, residents voted to rename the village Freeport, adopting a variant of a nickname used by ship captains because they were not charged customs duties to land their cargo. The south part of Freeport village is breached by several canals that allow access to the Atlantic Ocean. The oldest canal in Freeport is the late 19th-century Woodcleft Canal.

According to the United States Census Bureau, in 2019 Freeport had an approximated population of 42,956 with an estimated medium property value of $530,000, and real estate property taxes to be nearly $12,000 per year, making the cost of living index in Freeport very high. The poverty rate among those that work full-time is 2.24% and 10.79% among those working part-time.

At the Law Offices of Ronald D. Weiss, we can help with debt relief and filing for bankruptcy to help you regain control of your financial situation.

If you’re a resident or business owner in Freeport and you are drowning in debt, call the Law Office of Ronald D. Weiss to discuss exploring different options to help you pay off your balances. For Freeport residents, we have an office conveniently located at 42 Guy Lombardo Avenue, Freeport, NY 11520.

A Chapter 7 bankruptcy begins by filing a petition for bankruptcy along with supporting documentation to the court. Before a petition can be filed, the debtor will first need to pass the “means test” in order to qualify for this type of bankruptcy. At this point, something called an “automatic stay” will happen which stops all collection attempts and legal claims against the debtor. A Chapter 7 trustee will then determine which of the debtor’s property and assets will be liquidated. This may include unsecured debt, medical bills, and certain tax debts.

Unlike Chapter 7, a Chapter 13 bankruptcy does not involve liquidation of your property but instead requires a debtor to make payments for a certain period of time before being granted a discharge. However, just like Chapter 7, an “automatic stay” will go into effect to stop collection attempts and legal claims. During a Chapter 13 bankruptcy, a trustee will reorganize debts and require the debtor to make manageable payments to creditors over a three-or five-year period. Once that term is completed, any remaining qualified debts can be discharged.

Chapter 11 bankruptcy is mostly used by business owners who are trying to remain in operation after bankruptcy. Similar to Chapter 13, debts are reorganized, and the court names a business owner as a “debtor in possession” who executes the tasks of a bankruptcy trustee. This can include taking orders from the Court and reporting important information back to the Court regarding the company’s finances.

Contact a Freeport Bankruptcy Lawyer to Discuss Your Options

Whether filing a Chapter 7, 13, or 11, the process can be complex because it involves complicated compliance requirements. Thus, it’s important to have an experienced bankruptcy lawyer handling your case to help you receive a successful resolution. Schedule a free consultation today by calling the Law Office of Ronald D. Weiss at 631-271-3737 or contact us online today. We have an office conveniently located at 42 Guy Lombardo Avenue, #210C, Freeport, NY 11520.