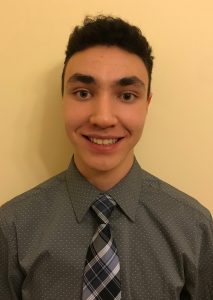 Mandatory Credit Counseling: An “Administrative Obstacle”
On October 17, 2005, the Bankruptcy Abuse Prevention and Consumer Protection Act (BAPCPA) became effective in its entirety.1 This was a monumental day in the history of the United States, as the Bankruptcy Code was altered tremendously, leading to an unprecedented decrease in bankruptcy filings in the short term. But what were the long-term implications? Was the BAPCPA successful in fulfilling its objective: to reduce bankruptcy fraud?
First, it is imperative to understand the historical context of the BAPCPA. From a historical perspective, the BAPCPA was a piece of legislation designed to deter an increasing number of filings for bankruptcy, specifically those filed under Chapter 7 of the Bankruptcy Code.2 The rapid growth in non-business Chapter 7 bankruptcy cases, compared to the much smaller increase in Chapter 13 filings, led many politicians to believe that consumers were filing under Chapter 7 provisions despite having sufficient assets to pay off their debts. The National Bankruptcy Review Commission (NRBC) was formed in 1994 precisely “to investigate and study issues and problems relating to Title 11, United States Code”.3 The statistics can be read to confirm the legislators’ fears. In 1990, 500,000 Chapter 7 cases were filed, yet the number of Chapter 13 cases was slightly greater than 200,000.4,5 By 1997, however, over 1,000,000 Chapter 7 cases were filed, while the number of Chapter 13 cases remained far below 400,0004,5 (see Figure 1.). This large discrepancy between Chapter 7 and Chapter 13 cases was one of the many findings produced by the NRBC in its Final Report entitled Bankruptcy: The Next Twenty Years.6 With this background, lawmakers drafted a preliminary version of the BAPCPA in 2001 and passed the bill in 2005.7
In this light, it is important to examine the major changes to Title 11 of the United States Code that resulted from the passage of the BAPCPA. As George W. Bush stated “The act of Congress I sign today will protect those who legitimately need help, stop those who try to commit fraud and bring greater stability and fairness to our financial system”.8 The way in which the BAPCPA accomplished these goals was threefold: implementation of limits on the automatic stay for repeat filers, creation of the “means test” to determine eligibility for Chapter 7 provisions, and the imposition of mandatory pre-bankruptcy credit counseling.9 The law stipulates that “during the 180-day period preceding the date of filing of the petition by such individual…an approved nonprofit budget and credit counseling agency” must “outline the opportunities for available credit counseling and assist such an individual in performing a related budget analysis”, which “an individual shall file with the court”.10 Furthermore, the completion of a second course that “has been effective in assisting a substantial number of debtors to understand personal financial management” is required once a case has been filed.11 The content of the two courses must be approved by the U.S. Trustee and is intended to prevent the abuse of the bankruptcy laws. As per George H. Bush, “[filers] walked away from debts even when they had the ability to repay them”12. But do the courses achieve their purpose?
Prior to answering this question, it is crucial to differentiate between the two courses. The first course, which must be complete before filing, can be described as “credit counseling”, where personal finances are reviewed, bankruptcy alternatives are discussed, and a personal budget/repayment plan is created.13 The second course is completed after filing, and can be described as “debtor education”. This course provides financial management strategies, such as how to use credit responsibly, how to develop a budget, and how to manage money.14 In short, this course aims to prevent a repeat fall into debt.
Regarding the first “credit counseling” course, experts in the field see little effectiveness in reducing bankruptcy filings. Despite a sudden drop in bankruptcy cases (to only 4.62 percent that of 2004) after the passage of the BAPCPA,15 the number of filings increased to 99.7 percent that of 2004 by 2010.16 This is indicative that the “credit counseling” course was ineffective in presenting other options besides filing for bankruptcy as alternative pathways to debt relief. Moreover, certain experts, such as University of Michigan Law Professor John Pottow, believe that these “credit counseling” services “have a positive incentive to move debtors directly into bankruptcy quickly and cheaply”.17 The fact that the “credit counseling” service must submit a repayment plan to the court if it deems that the filer is able to pay off the debts serves as an unnecessary deterrence. As Terri Haley writes, “consumers usually file for bankruptcy when the cost of not filing outweighs the consequences of filing”18, meaning that the dispute over a filer’s inability to follow the “credit counseling” service’s repayment plan is simply another obstacle during already very difficult times.
On the other hand, the second “debtor education” course is quite beneficial. Since it must only be completed after the debtor files for bankruptcy, and there is no plan that must be presented to the court upon its completion, the debtor only loses the nominal fee that must be paid for the course if the debtor is ineligible for the fee waiver. However, the content of this second course helps prevent repeat falls into debt: only 8 percent of those who file for bankruptcy have filed at least once before.19
Overall, the two required credit counseling courses, as part of the BAPCPA, must be examined individually. Although the second “debtor education” course possibly aids in preventing repeat filings for bankruptcy, the first “credit counseling” course is entirely unnecessary and only adds to stress of filing for bankruptcy. The U.S. Government Accountability Office states it best: “the requirement may often serve more as an administrative obstacle than as a timely presentation of meaningful options”.20
Figure 1. 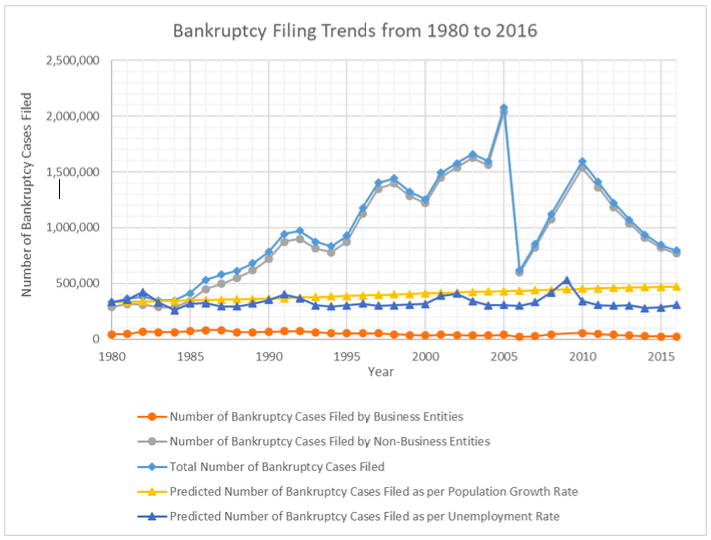 (Data is from the Administrative Office of the United States Courts and the U.S. Census)
Notes