What Are the Qualifications for Bankruptcy? | Long Island Bankruptcy & Foreclosure | Law Firm 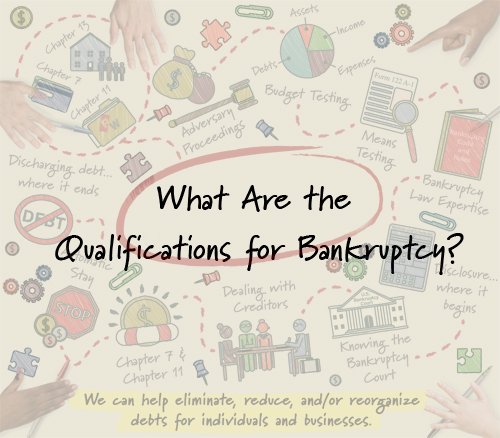 What Are the Qualifications for Bankruptcy?

The different chapters of the Bankruptcy Code vary in their approach to debt relief and in the qualifications they have in order to be able to file for bankruptcy protection under that chapter.

Chapter 7,  is the most frequently filed bankruptcy case because it “discharges” or eliminates debt. However Chapter 7 is not available for everyone since it has criteria which determine whether a client can and/or should file a case under Chapter 7. The main criteria is the income level of the client as determined by family size (or the number of dependents in a household), when compared to the median income for a family of that size in New York State. Means testing is designed to determine if a client above the median income for their household size in the State of New York qualifies to file a case based upon their necessary expenses as determined by their actual provable spending as capped by certain IRS standards used in such testing. The means test looks at a client’s income, deductions and necessary expenses in the 6 months prior to filing the bankruptcy case. To qualify for Chapter 7 it is necessary to have negative disposable income under the means test. If a client has positive disposable income according to such test, they can still qualify for Chapter 13 relief, and perhaps pay a relatively small percentage of their debt over a 5 year plan, but they may not file for Chapter 7 at that time.

Chapter 13, unlike Chapter 7, is much more open to persons filing and does not have an official income or an unofficial asset value limitation. Chapter 13, allows an individual with positive disposable income and/or with equity in their assets to obtain bankruptcy relief under a 5 year Chapter 13 plan where the debt or a portion of the debt is paid without additional interest or charges by the creditor.  However, Chapter 13 has a limitation, as of April 1, 2019, on the amount of secured debt (which cannot exceed $1,257,850.), and unsecured debt (which cannot exceed $419,275.); however because such limitations are very high, they usually only affect individuals investing in real estate, or in business, or who have unusually high mortgages.

Chapter 11, is available to reorganize individuals (or married couples), who want to reorganize their debts, but who do not qualify under the debt limits of Chapter 13. But Chapter 11 is mainly used by corporations which do not qualify to file under Chapter 13 which is a smaller reorganization chapter for individuals only. Chapter 11 is designed to accommodate larger debt loads, for larger cases, usually filed by businesses. Subchapter V of Chapter 11 which is a streamlined version of Chapter 11 for small businesses was originally limited to business with debts of up to $2.7 million dollars, but this debt cap was temporarily enlarged under the CARES Act, and subsequent legislation to debt of up to $7.5 million dollars (until March of 2022 unless further extended).

Deciding which chapter of the bankruptcy code to use can in some cases require careful strategy with a bankruptcy attorney. Please call us for a free consultation to discuss your legal options 631-271-3737.